The Story Of Auntie Uncle

Hello! I’m Ellie Royce, children’s author. I've just celebrated the release of my new picture book Auntie Uncle: Drag Queen Hero written by me, illustrated by Hannah Chambers and published by Pow!Kids Books in Brooklyn, New York. It’s one of the very first children’s picture books in the world to feature a Drag Queen main character. I’ve been invited to share the story of how this book came about with you.

One of the questions that people ask, especially people who know me, a middle aged, white, cis gender woman is- what inspired you to write a picture book about a Drag Queen?

I take this question as a compliment because I love to surprise and challenge people to look at things differently. I don’t believe in making assumptions about people or putting them in boxes, so this question always makes me smile.

This is how the story goes:

Chatting with my daughter one day about three years ago, we discussed the kinds of books that she and her friends wanted to read to their kids, and the fact that they were largely non -existent.

She was talking about the kinds of books that show diverse families and their perspective on life. This is a bit of a sensitive issue, given that I totally support own voices stories and I certainly didn’t want to encroach on, or appropriate, a story that wasn’t mine to tell.

I love writing stories about people, because I believe that our stories have power, that each of our individual stories is a thread in the fabric of our communities, our culture and our place on the planet. This fabric changes when our stories change, so every person’s story is meaningful and important with the power to change the world for the better.

The stories we create and tell each other also have this power. It’s almost magical, the way stories can change lives, heal and inspire. That’s why I wanted so much to try and get this story right!

I started thinking about the themes and concepts I wanted to work with, respect, diversity, inclusion, equity, courage and unconditional love, and about how these essential qualities exist everywhere, in all kinds of people.

I recalled a former colleague of mine who cared for disabled and elderly people as his day job and did it beautifully. His clients absolutely loved him. He did drag on weekends and had a whole tribe of nieces and nephews who adored him.

I was also really interested in the concept of ‘courage’ because it seems to me there’s different kinds of courage. There’s the outward kind, as in when my character dives into the path of an oncoming float to save a runaway puppy, then there’s the kind that is personal and maybe the hardest to muster up, the courage to be your true self.

Society accepts and often rewards that outward courage, but the other kind, the courage to be true to your heart and soul - despite possible negative reactions/responses from others - that’s usually much more of a challenge to deal with.

Everyone can identify with this challenge in their own way, but I feel it’s particularly relevant to LGBTQI+ kids and rainbow families. 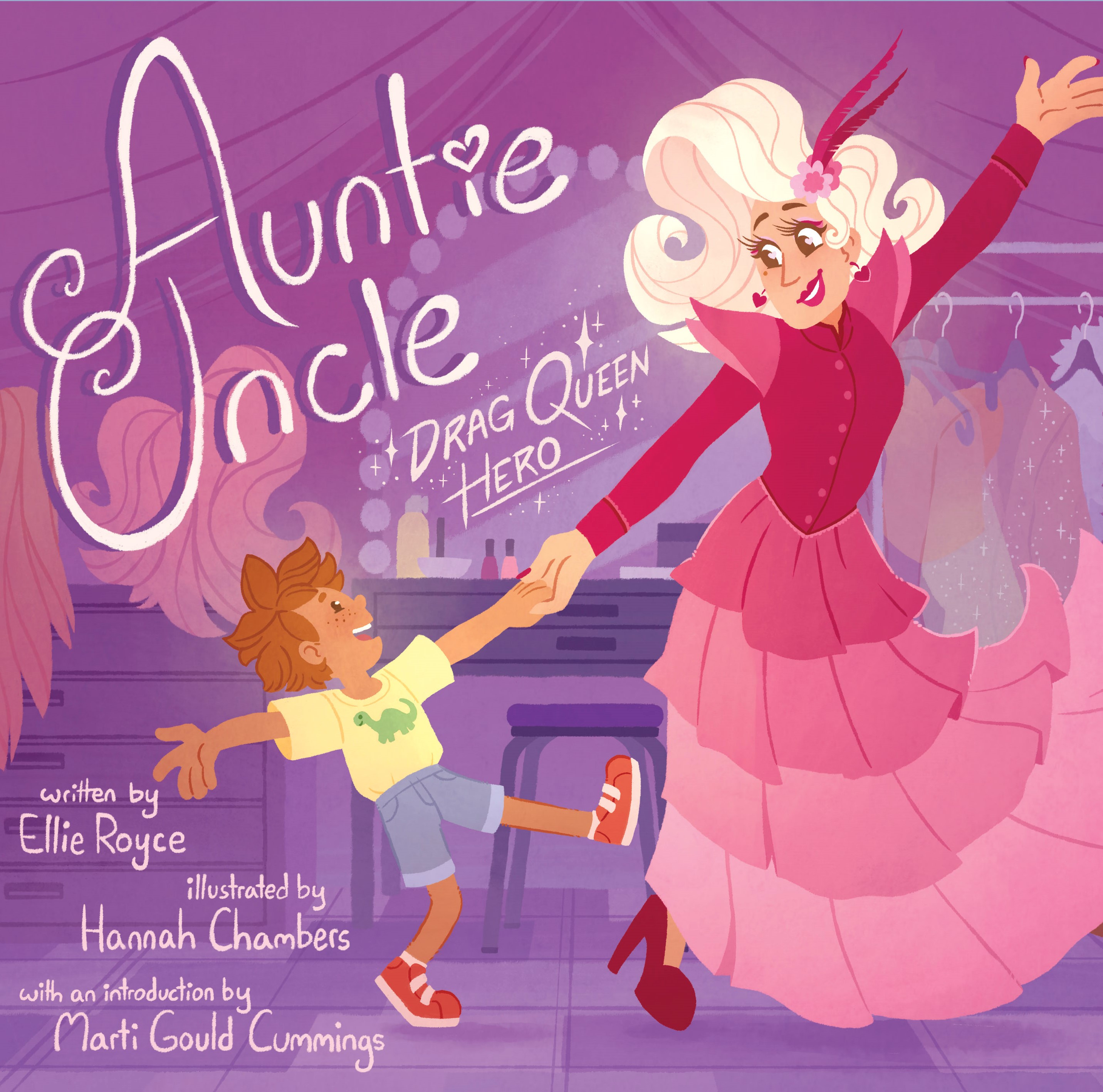 How to roll all of this up into a child-centred story?

And of course, that was the key. Seeing this relatively complex scenario through my child narrator’s eyes, and listening to their voice tell me the story, was when it became clear and simple.

They told me: I love my Uncle Leo; I love my Auntie Lotta and it’s really cool and fun that they’re both the same person!

As the story unfolds and the question is posed as to who should accept an award, Leo  or Lotta, the answer- through my child narrator’s eyes- was simple. Why can’t you both accept the award?

When the gender of Leo and Lotta becomes a bit more fluid and less binary later in the story, my child narrator simply says: I love Uncle Leo and Auntie Lotta, but I think maybe I love my Auntie Uncle best of all.

Drag artists and performers are really having a moment - something that I didn’t see coming three years ago when I wrote the story but am so happy to see now. I feel very fortunate to be a part of this wave of children’s literature promoting diversity, inclusion and kindness to all our kids, and to allow kids in rainbow families with their own Auntie Uncles to see themselves reflected in a positive way.

So far, I feel like the best thing about Auntie Uncle being released is seeing it in the hands of the people I wrote it for! I’ve connected with real life “Auntie Uncles” all over the world who are overjoyed with it.

I also love the vibrant and emotive illustrations Hannah Chambers created, they are an animator as well as an illustrator, you can tell, can’t you? The illustrations just leap off the page and into your heart.

As for both my daughters, well, there are no grandkids on the horizon just yet. But when they come along, I’ll be so proud to read this book to them, hopefully with lots of other books that show all kinds of different ways of being a happy and decent human being and all kinds of loving families with all kinds of people in them.

Of course, the global pandemic that we won't name happened at the same time as Auntie Uncle was released, so there wasn't an actual launch party- yet. But never say never! Auntie Lotta would never forgive me if I didn’t give them a part-AY at some point in time!

I hope you've enjoyed the story about this story. I have another picture book due out later this year, also about a rainbow family... but that's another story!

You can find me on Facebook at Ellie Royce Author