The slogan for the 2021 Census is “Every stat tells a story”. The ABS website tells us that the Census is “the most comprehensive snapshot of the country and tells the story of how we are changing”. The information collected by the Census helps government, non-government organisations and businesses to provide of a range of services across the community.

But what if the questions don’t allow you to provide accurate information about you and your family?

After my experience of the 2016 Census, it was no surprise that the 2021 version didn’t tell the story of me and my family. Like many in the LBGTQ+ community, I braced myself as I worked through questions that felt like they weren’t meant for me.

Unlike the last Census, I completed this one as a single parent. It turns out that single lesbian parent is a statistical non-entity due to the failure of the questions to record it. The only way the form is able to capture sexual orientation is if you live with your partner AND you happen to be in the same household on Census night. Sure, the pandemic has made this more likely but it also means couples could have been separated by border closures. In normal circumstances, one person being away for work would render your relationship and therefore sexual orientation invisible.

Even then, you can’t accurately draw a conclusion about someone’s sexual orientation from their current relationship. For people identifying as bisexual or pansexual who are in a relationship with someone of the same gender, the survey just reinforces the invisibility experienced in their day-to-day lives.

Even apparently harmless questions were asked in a way that excluded us. The question about where each person’s mother and father were born remained unaltered despite feedback (including mine) following the last Census. It was maddening, not just because it clung blindly to a heteronormative model of family, but also because it would have been so easy to refer to parent 1 and parent 2 as so many other forms do these days.  The only way I could approach this question in relation to my daughter was to state “my child has two mothers” in the “other” option under “father” and “mother”. I wasn’t prepared to make a choice about which mother should be counted as a mother.

Being forced to complete the survey with inaccurate information because my experiences didn’t fit the questions was a frustrating experience. Because I had to choose my child’s main residence, I wasn’t able to indicate that she lives in a share care arrangement. It’s not an uncommon scenario among LGBTQ+ families whose post-separation arrangements reflect a more equal and less gendered division of care. In addition to separated families, LGBTQ families include coparenting relationships that span more than one household.  Without a way of recording these families, the picture of family diversity is missed.

It occurred to me that if my daughter not been with me that week, there would have been no way of even indicating that I was a parent. As a non-biological parent, the question about whether I had given birth wouldn’t have helped me. This question wasn’t available at all to people who identify as non-binary or trans masculine and inappropriately offered to those who identify as trans feminine (although weren’t able to do so on the form).

The Census provided very limited options for recording gender identity, with trans people being excluded altogether this time around. At least the 2016 provided an opt in procedure for recording trans identity, albeit cumbersome and with privacy issues. Non-binary was included as an option (if you clicked “other”) but categorising it as sex rather than gender just revealed a lack of engagement with issues of gender identity.

I couldn’t help feeling that the ABS had missed the opportunity to get the full story about the Australian community. My heart sank further when I saw the “Census Stories” on the website, a list of examples of how Census stats are used to provide crucial services for the aged, youth, migrants and to first nations people. The omission of the LGBTQ+ community was blatant. Without accurate stats, those services can’t be delivered in a targeted way, for example addressing the higher risk of suicide in LGBTQ+ youth.

It’s really important as LGBTQ+ families that we are able to access services that are sensitive to our needs. This is particularly the case when we are at our most vulnerable and need mental health or post separation support, for example. If the stats don’t provide an accurate picture of our families, we get swallowed in mainstream services that don’t reflect our experiences.

Being presented with questions that don’t fit your family makes you feel that you sit outside what is considered normal. It erased my family and left out huge chunks of who I am.

It doesn’t provide “a comprehensive snapshot of the country” or “tell the story of how we are changing”.

We need to make sure that our families and our relationships count.

Rainbow Families is writing to the ABS about Census 2021. You can help by telling us about your family and which questions (or lack of questions) affected you and your family. Any information you provide us will be kept confidential. Send to [email protected]

You can also take part in Equality Australia’s Count Us In campaign by signing their petition to Michael Sukkar Assistant Minister to the Treasurer and including your comments about how the Census needs to change to tell the story of you and your family. 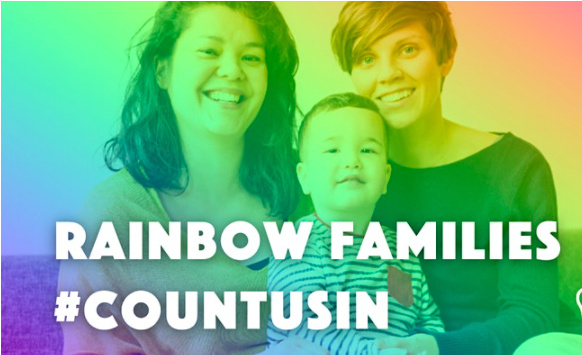 Lara has been volunteering with Rainbow Families to help organise our recent sports carnival / end of year event. Lara replied to a call out we did in our newsletter looking for sporty people to get involved and help out with our first ever...

Vanessa, one of our founding Board members has stepped back from the Rainbow Families Board after nearly seven years of volunteering to support our community. Vanessa was at the first meetings of Rainbow Families where a group of gay and lesbian parents came together...